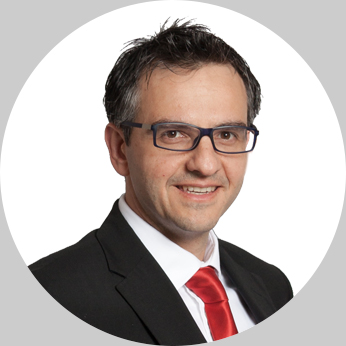 Altron: From broken circuits to a strong connection

Johny Lambridis, Head of Equity, discusses how Prudential’s informed bet on debt-burdened Altron has paid off for clients in the Prudential Equity Fund.

In the past year or so, a number of South African companies have seen their share prices come under significant pressure as a result of rising concerns over their high levels of debt, combined with a deteriorating growth outlook. These would include companies like British American Tobacco, Aspen, Tongaat Hulett and AB Inbev, to name a few. And while too much of a good thing like debt can prove to be very bad for companies and their shareholders at times, it can also offer opportunities. Listed ICT (information, communications and technology) group Allied Electronics (Altron) is an example of how investors like Prudential can take advantage of investor concerns over a company’s debt burden and fall in its share price to add value to clients’ portfolios.

Altron decides to consolidate
Founded over 50 years ago in South Africa by Bill Venter, Altron was a large and (historically) successful - if sprawling - conglomerate. At one point it boasted no fewer than nine separately listed entities, but by 2008 this was consolidated to only two, Altron and Altech (Allied Technologies). The family-controlled investment holding company managed to grow rapidly in the decade of the 2000s and its balance sheet remained largely debt-free and cash-positive, but it then stumbled and lost its way due to a poorly executed African foray, reliance on Eskom and increasing competition in the rapidly changing technology businesses it controlled. 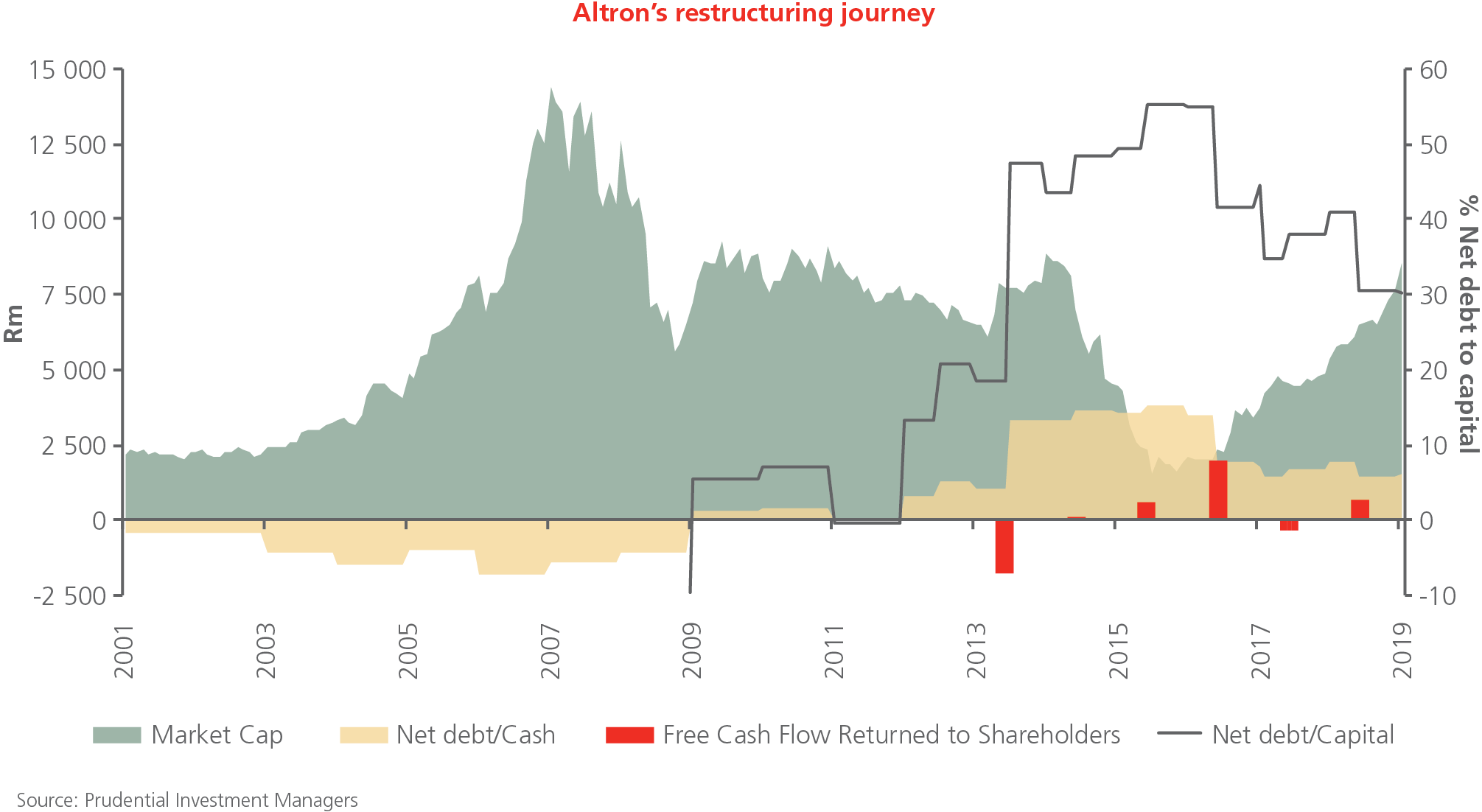 In 2013, the Venter family (with Bill’s sons Robbie and Craig heading Altron and Altech, respectively) decided the group needed to be further consolidated from 12 separate operating companies into one listed entity focused on ICT, with a centralised management structure. In a nutshell, the plan for the restructuring consisted of Altron buying out the remaining minority shareholders in Altech. As the cashflow generation of Altron had deteriorated, not least because of the problems at Altron’s Eskom-facing business (Powertech Transformers), the Altech acquisition had to be funded primarily with debt. Altron’s restructuring journey is illustrated in the accompanying graph.

The purchase of Altech using debt (shown by the red bar representing negative free cash flow to shareholders in the graph) combined with further missteps saw Altron’s net-debt-to-capital ratio jump from a healthy 18% to nearly 50% in mid-2013 (as shown by the pink line). While this level is undoubtedly high compared to the average JSE-listed company at around 30%, it might not have been unduly concerning had Altron been able to sell certain non-core businesses quickly at reasonable prices and continue operating smoothly. However, the business climate became increasingly difficult, with the result that Altron’s free cash flow deteriorated even further. At the same time, the businesses Altron was looking to dispose of were built around outdated products like the paging group Autopage and Altech UEC, which manufactures digital broadcasting devices such as set-top boxes, but hadn’t proved able to compete with China.

While investors initially responded positively to the consolidation plans, they soon became disillusioned with family control and concerned that Altron would not be able to sell its assets in a timely manner. The growing debt pile was a large concern, especially given Altron’s worsening operating performance. Its share price consequently came under pressure, falling steadily from over R26 in June 2014 to trade briefly under R5 in March 2016. The company’s market capitalisation, meanwhile, declined by roughly 75% (as shown by the green shaded area in the graph).

Hitting bottom
It was in March 2016, when the share price fell below R5, that Prudential fortuitously bought Altron shares for the Prudential Equity Fund – having kept a close eye on the company as it became more attractively priced. Although at that point Altron’s net-debt-to-capital ratio had risen to 55%, our analysis suggested that Altron was worth at least double its share price, and assumed that management would be able to sell its non-core operations, reduce its debt and stabilise some core non-manufacturing operations. Although not without significant risks, we believed that there was a sufficient discount built into the share price to provide a downside cushion and compensate for the risk involved.

Given disposals of some of its operations in financial year ending February 2017, the company’s free cash flow was equal to its total market capitalisation of R2bn, suggesting its remaining equity was being valued at zero by the market.The capital was used to repay debt, represented in the graph by the red bar showing over R2.0 billion in free cash flow returned to shareholders, and a consequent drop in the group’s net-debt-to-capital ratio from 55% to around 40%.

The turning point
In late 2016, a “white knight” materialised to help Altron with its cash flow problems: the company received a R400 million cash injection from Value Capital Partners (VCP), a venture capital firm, in return for a 15% shareholding. Its intent was to help reposition Altron from a family-controlled and managed business to an independent entity. VCP’s capital injection was used to strengthen and invest in the remaining core operations.

The Venter family subsequently relinquished their control, lowering their collective voting position to 25.1% from 57% previously while maintaining their 17.5% economic interest, by unifying Altron’s dual class share structure. Prudential was, in principle, supportive of the ownership restructuring, and saw the addition of the VCP representatives to the Board of Altron as positive. However, our analysis did show that the Venters were overcompensated for giving up control, and we voted against the proposed share unification ratio.

In other management changes over time, the Executive Committee was streamlined, centralised and aligned to the company’s ICT focus, and ultimately, staff numbers were reduced by some 40%. Bill Venter’s sons Robbie and Craig resigned their CEO positions, and a new Altron CEO, Mteto Nyati, with strong ICT experience at MTN, was appointed in April 2017.

Meanwhile, as a result of the centralisation of the company, Altron was able to consolidate and restructure its debt repayments into a longer-term repayment schedule. It also reduced its interest rate on the back of the consolidation, lowering its liquidity risk and cutting costs. As such, the company became less dependent on asset sales and increasingly able to repay its debt through free cash flow.

In FY 2019, the company was able to report improved cash generation, higher top-line income growth, higher profitability, better working capital management and a much-improved balance sheet. On top of this, Altron finally managed to sell its last non-core asset, Altech UEC, and the CEO pronounced the restructuring complete in May 2019.

Recovery adds value to Prudential Equity Fund
Boosted initially by bargain hunters, Altron’s share price began to recover as its balance sheet improved following the VCP cash injection and investors gained confidence in the new management and its plans to take the company forward. Since Prudential’s purchase of Altron shares at below R5 in March 2016, the counter has gained nearly 400% (as at the time of writing). This has contributed to the outperformance of the Prudential Equity Fund versus its benchmark over the period. The case of Altron is an excellent example of how Prudential, through careful analysis of a company’s net free cash flow, debt levels, debt repayment schedule, share price valuations and other measures, can identify opportunities for adding value to client portfolios over time.

To find out more, contact your financial adviser or our Client Services Team on 0860 105 775 or email us at query@prudential.co.za.